At The Grainger College of Engineering’s IQUIST quantum testbed, a collaboration of researchers is hard at work assembling quantum processors based on today’s leading quantum bit (qubit) technologies—superconducting circuits and trapped atomic ions.

The state-of-the-art IQUIST quantum testbed is led by Illinois Physics Professors Wolfgang Pfaff and Brian DeMarco and will explore novel ways to hybridize quantum hardware and scale it to high performance systems.

IQUIST—the Illinois Quantum Information Science and Technology Center—was launched in 2018 to bring together the diverse expertise at UIUC needed to accelerate the development of quantum science and technologies, to train a quantum-ready workforce for the State of Illinois and the nation, and to build strategic partnerships with industry to develop a robust supply chain for emerging quantum technologies. Although quantum-computing research and development has a growing presence in industry, many open scientific and technological questions remain that are best solved by academic labs. The IQUIST quantum testbed is providing a venue for quantum experts to address problems collaboratively, and even to work with industry partners.
DeMarco comments, “The goal of the IQUIST testbed facility is to build and test small quantum processors for interdisciplinary research and education. We are planning activities that bring together researchers at all stages from leading Illinois programs, including Computer Science, Electrical and Computer Engineering, Physics, Materials Science, Mathematics, and more.”

The current plan is for students to access the IQUIST quantum testbed through quantum computing classes, where they write and run small quantum programs. IQUIST welcomes current and future industry partners to take advantage of the testbed once it’s operational, to plug in devices they are developing.

That program will roll out over multiple years. But first, the teams must build and test the devices that exploit quantum mechanics to process information in new ways. At the heart of these processors are qubits (rather than bits) that can store information as a 0, a 1, or as a superposition of a 0 and a 1. Superposition, along with entanglement, are the quantum features that enable quantum computing to solve certain problems more efficiently than conventional high-performance computers.

The trapped-ion architecture is led by DeMarco, who is also the director of the National Science Foundation’s Quantum Leap Challenge Institute for Hybrid Quantum Architectures and Networks (QLCI–HQAN), and, along with IBM project manager Kayla Lee, is co-lead of the quantum information thrust of the newly launched IBM–Illinois Discovery Accelerator Institute (IIDAI). DeMarco’s team uses strontium atoms as qubits. A primary goal of the NSF QLCI HQAN research program  is to investigate distributed quantum information processing architectures and protocols. These systems employ not just one kind of quantum hardware or qubit—instead quantum information is stored, manipulated, and processed using different modalities. Currently, the IQUIST quantum testbed researchers are focusing on trapped-ion and superconducting hardware as the first step.

DeMarco explains, “In trapped-ion quantum processors, an array of single atoms is suspended by electric fields inside a metal and glass enclosure that is evacuated to provide isolation from the environment. Each atom stores a qubit that can be used in a quantum calculation. An advantage of trapped ions compared with other technologies is the absence of manufacturing variations—every atom of a certain species and isotope is identical.”
In trapped-ion systems, cutting-edge laser systems generate light that cools the ions and controls the state of each qubit. The information is read out by snapping a picture of the atoms using a camera that can detect single photons of light.

“Small quantum processors, or registers, will be formed by trapping groups of 5 to 10 atoms in separate regions of a chip trap,” DeMarco continues. “The chip is about one centimeter wide and fabricated using CMOS-technology processing techniques by collaborators at the Massachusetts Institute of Technology Lincoln Laboratory, a federally funded research and development center sponsored by the U.S. Department of Defense. The qubit registers are separated on the chip by 100 microns, which is about the diameter of a human hair.”
DeMarco says that the quantum algorithms that would normally be executed on a single processor are distributed across qubit registers through quantum entanglement.

“This distributed approach to quantum computing has barely been explored,” DeMarco adds. “Our goal is to understand how to develop new protocols for secure information transfer and processing and measure the potential advantage of this technique.”

Superconductors are a promising material for developing quantum circuits because they carry current with zero resistance, meaning current can flow with no loss. Pfaff explains that the Josephson junction circuit is like a revolving door on a superconducting wire that allows researchers to impede and control the flow of electrons, allowing only one pair through at a time.

Pfaff continues, “The Josephson junction is the quantum element of our system. This component doesn’t exist in conventional electrical circuits, which are made up of a resistor, a capacitor, and an inductor.”

With the Josephson junction, researchers can build special circuits that mimic atoms having two distinct states that, similar to atomic qubits, store the qubit.

Pfaff says one advantage of superconducting circuits in quantum computing is that they could be printed on chips in the same way that conventional computer microchips are fabricated, though they would be slightly larger. But one barrier is manufacturing chips that are identical, a key ingredient for scalable quantum computing. Because such precision is an unsolved problem, Pfaff’s research project focuses on the development of innovative error-correction strategies that will mitigate minute differences in the chips.

“In quantum computing, the qubits have to be much more precise than in classical computing, with an error margin of no more than one in a million, if that,” notes Pfaff. “So the big challenge is making chips that are within specification to that accuracy. My team will focus on strategies for how to assemble circuits to accommodate differences among qubits.”

The scaling strategy that the UIUC team is pursuing hinges on communication between qubits that are not directly connected to each other, to the extent that they can be located on separate chips. Instead of performing a quantum computation by controlling how qubits interact with each other, the UIUC team will equip their qubits with a quantum communication link through signals that travel via transmission lines. In that way, qubits that may have been considered incompatible can still be used together if they can exchange signals.

DeMarco also stresses the importance of the scalability of the two experiments: “Our teams are pursuing a modular approach to quantum processing. This novel method for scaling to larger qubit counts and new applications mirrors modern high-performance computing architectures.”

In addition to the two current experimental approaches, the IQUIST quantum testbed, located in the basement of the Engineering Sciences Building, has a control center that will be used for operating the testbeds. And it will eventually incorporate a multi-node cross-campus quantum network currently being developed by Physics Professor Paul Kwiat. IQUIST plans to eventually connect that quantum network to the Illinois Express Quantum Network (IEQNET) that spans the metropolitan Chicago area.

The IQUIST quantum testbed also houses a machine shop for the fabrication and design of mechanical and electronic components to support the experiments. According to DeMarco, the IQUIST testbed researchers have also been collaborating with companies locally, including Wagner Machine Company in Champaign, to complement in-house capabilities and help develop the national quantum supply chain.

IQUIST Executive Director Emily Edwards comments, “IQUIST’s mission is to advance quantum science and technology through innovative, translational research and education. The quantum testbed exemplifies this, and we expect to grow the facility in size and capability in the coming years.”

Notes from the IQUIST testbed team

“Working at the IQUIST testbed has been a great experience. I like that we can easily interact with people from other labs who have different backgrounds. It’s exciting to be part of IQUIST’s hybrid quantum research. I’m eager to learn all I can, even beyond the superconducting quantum circuits. As a new postdoc, I am also growing in this role, teaching and working with young students on a big project. This experience is invaluable for success as a postdoc—and maybe someday as a professor.”

“I always like to think of our work as a mom-and-pop shop that specializes in quantum information. The scale is small, but the attention to detail and autonomy makes the work feel more personal and rewarding. We are involved in a slew of technical areas from nanoscale fabrication to superconducting theory to best coding practices in Linux. I’ve even done some basic vacuum plumbing! It’s satisfying to look at the broad suite of skills I have learned for the lab and exciting to see how much more I can learn. My focus has been in developing fabrication recipes for our samples. After working on a small part of industry-scale semiconductor manufacturing, it has been humbling and empowering to work on all aspects of manufacturing for our smaller operation. Working alongside other students to establish best practices and get our samples to work in our cryogenic setups can be challenging. But when it does work, the feelings of personal accomplishment and independence are unparalleled.”

“While I have learned immensely about our strange quantum world in my quest to improve quantum information transfer, being in this lab has taught me there is more than just scientific knowledge to be gained from being an experimental physicist. Whether it’s assembling a small power supply or going into the cleanroom to develop stripline resonators, knowing that all these things I make will become the foundation for my Ph.D. feels rewarding. Finally, being under the guidance of an excellent adviser and working with amazing lab mates has shown me what it means to be a better graduate student and researcher, and they have given me the motivation to help shape our lab into something incredible.” 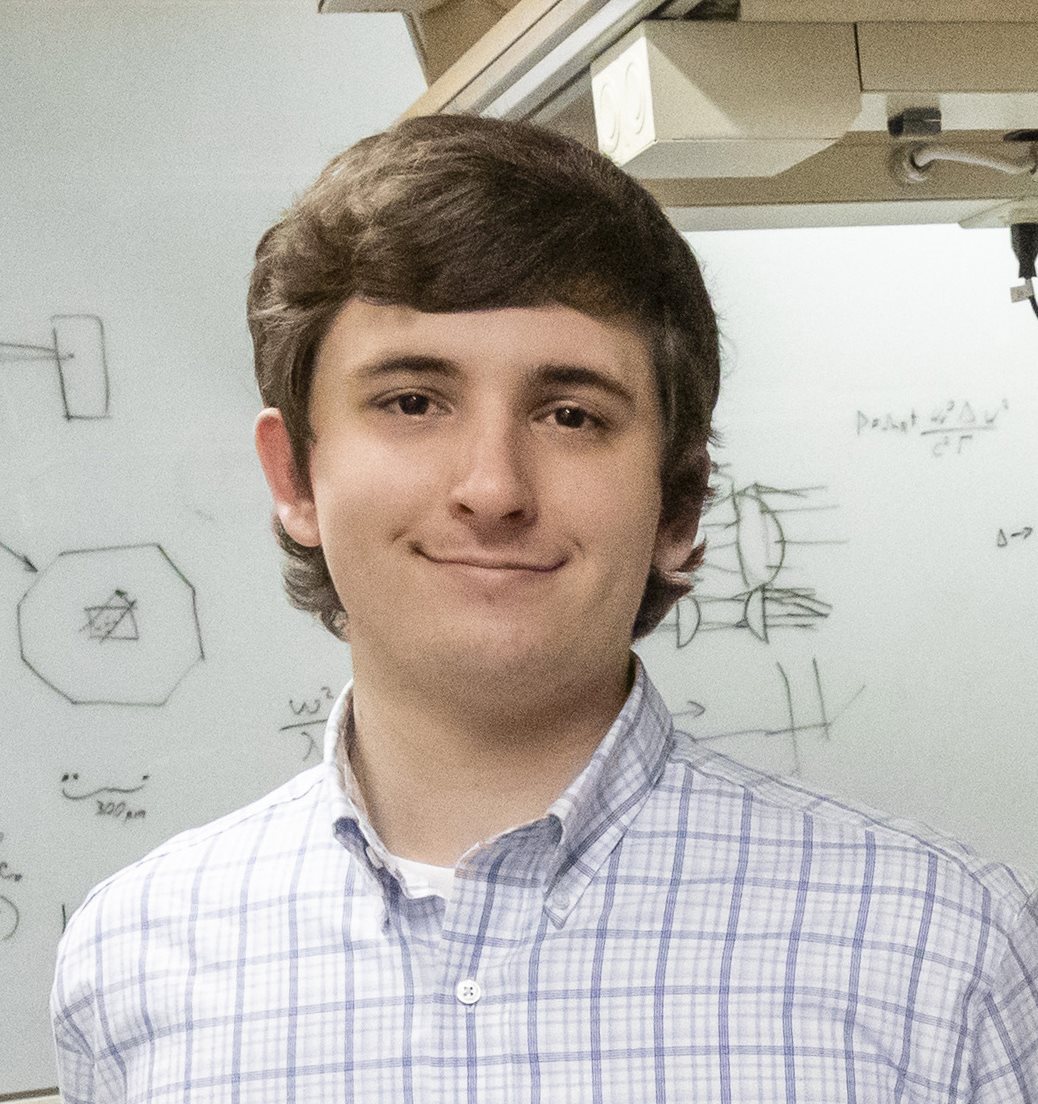 “My favorite aspect of working in the testbed is the variety of ways I can make progress: I can endlessly cycle through practicing hands-on skills with optics, signal processing and electronics, even bits of machining and plumbing. But I also have a laundry list of topics in theory, design, and communication to learn and practice, which helps immensely with handling roadblocks and avoiding burnout. One of my primary interests within the applications of science are those developments that allow for sharing experiences and that connect people whose struggles, ideas, and values otherwise go unheard. To this end, the broad and exciting prospects of QIS in communications and materials science make the skills I am developing at IQUIST priceless for the hopefully long journey I have ahead in R&D.” 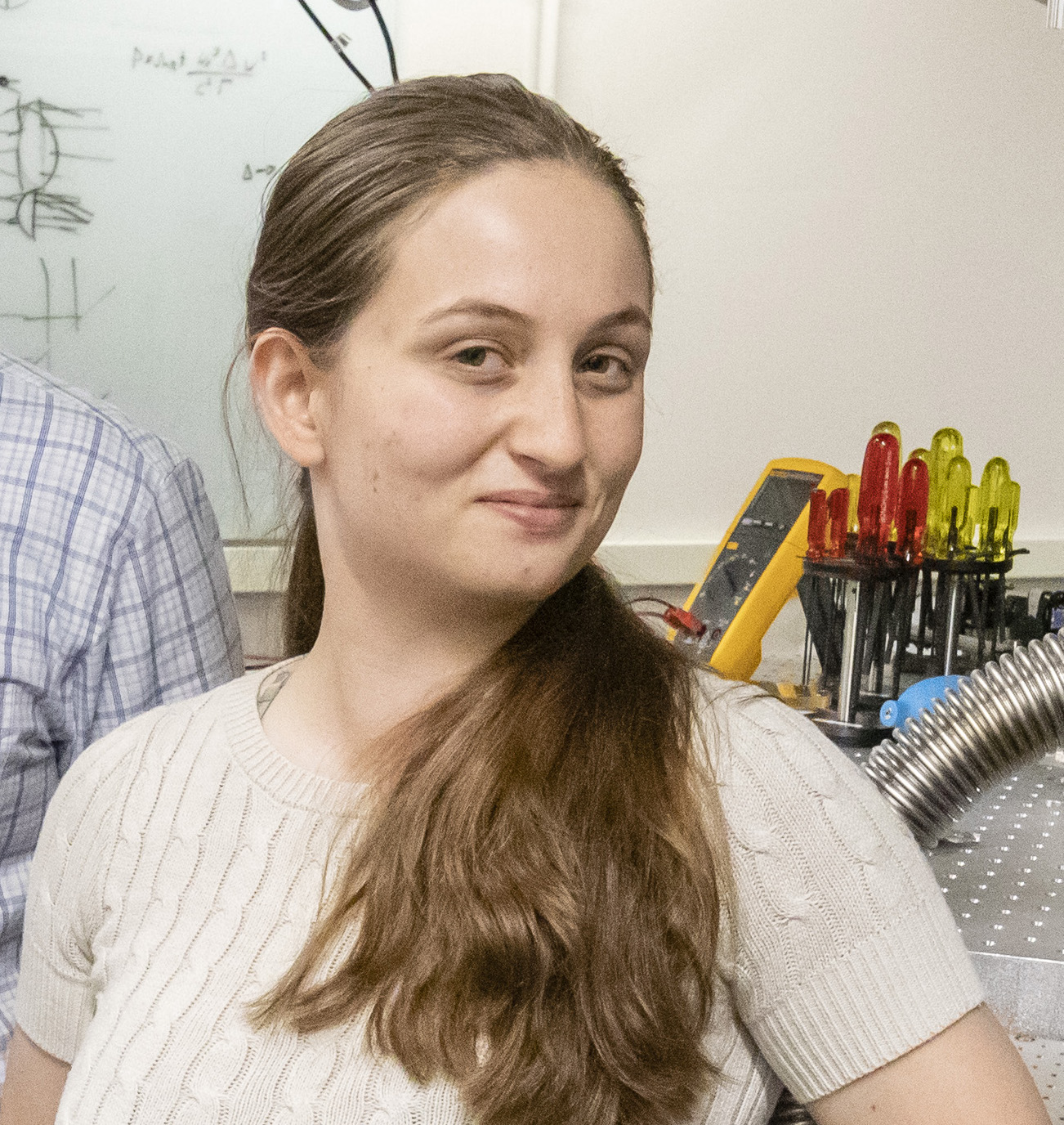 “Building a quantum information experiment has been very rewarding for me. Over the course of this experiment, I have expanded my skill sets, knowledge, and interests while pursuing fascinating research goals. I think this experience will be a spectacular steppingstone for my future career: I am confident that I will leave with the knowledge and curiosity to kickstart a fruitful career.”