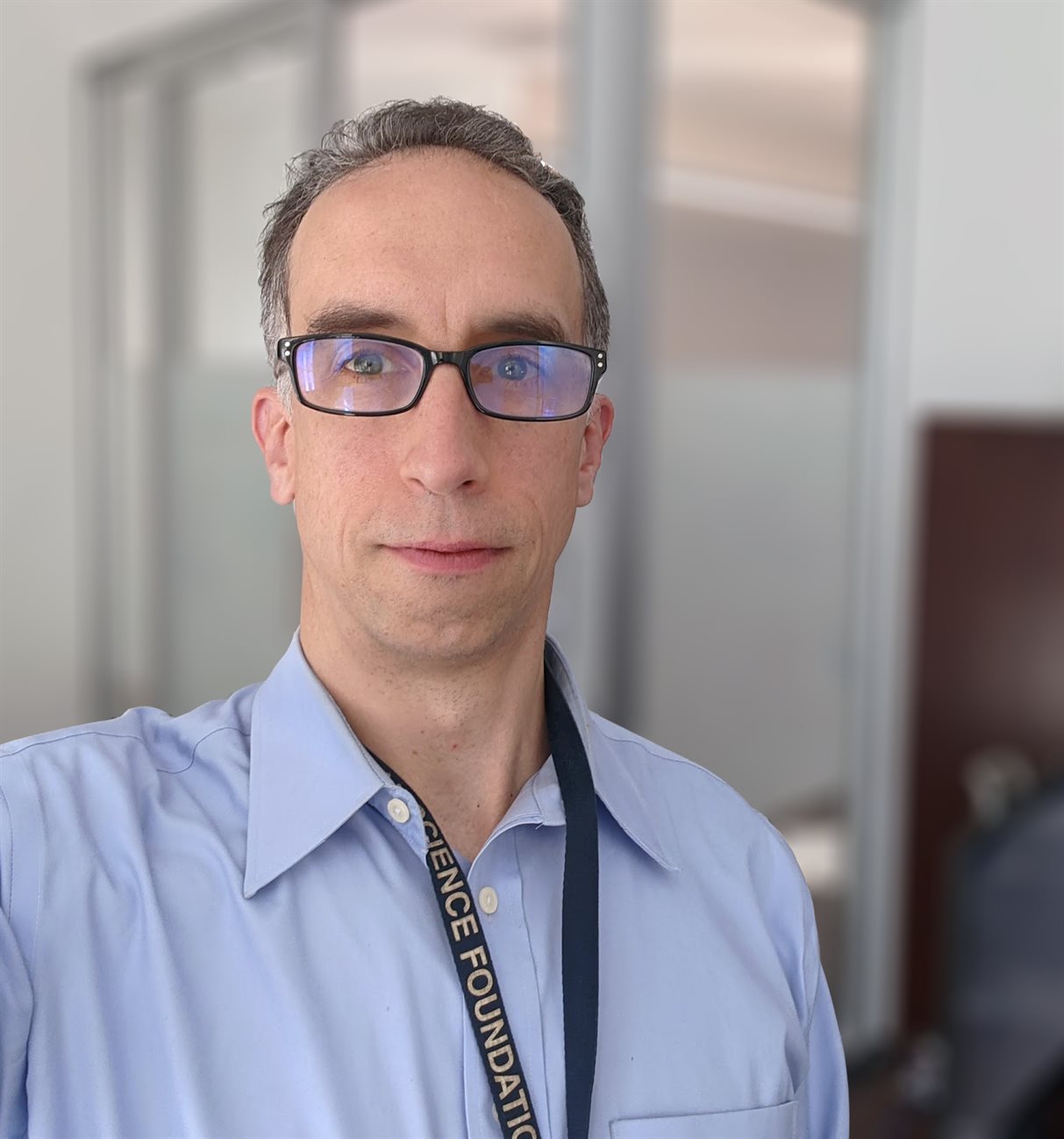 Fluent Across the Sciences

Illinois Physics alumnus and National Science Board Executive Officer John Veysey, on how his graduate student experiences prepared him to communicate in service of science.

John Veysey is an integrator. In his role as the executive officer and office director for the National Science Board (NSB), the governing board for the National Science Foundation (NSF), Veysey is constantly absorbing, sifting through, and interweaving a broad range of new information from diverse scientific disciplines—opinion, scientific research findings, and science policy. This is not new for Veysey—he has always enjoyed traversing the boundaries between different fields, even going back to his time as a physics doctoral student at Illinois. Fifteen years ago, he was wrapping up a dissertation that combined insights from microbial ecology, fluid mechanics, geochemistry, and fieldwork he had done at Yellowstone National Park. Now, collaborating with experts covering an even broader and more diverse range of disciplines is a key part of the work he does every day.

The National Science Board that Veysey supports comprises 24 presidential appointees and the NSF Director. Collectively, the board members represent all areas of science and all regions of the country. The board has advisory responsibilities to Congress and to the U.S. President and governance responsibilities to the Foundation. Veysey, who regularly holds conversations with scientists of all backgrounds, points out that each field brings its own set of concerns and its own lexicon to the table. He has to be conversant across the sciences.

A dissertation that transcended

“Having done interdisciplinary research I think really prepared me to be able to talk to people across disciplinary boundaries and do some of that integration of viewpoints, which is just so important for what I do at NSF,” Veysey underscores. “Cultures talk in different ways, and that experience really has helped me at NSF where I’m working in a position that touches on all the directorates and divisions.”

As Veysey wrote in his doctoral thesis, his work as a researcher included everything from running Monte Carlo simulations on a computer to traipsing around hot springs with pH probes in the middle of the night. Ultimately, this interdisciplinary approach proved that microbes are not the only important ingredient for the formation of the striking large-scale carbonate terraces at Yellowstone. 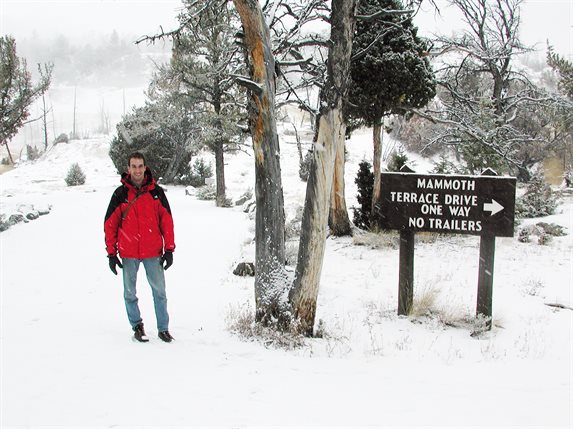 John Veysey stands by a sign pointing the way to the travertine terraces of the Mammoth Hot Springs, when he was an Illinois Physics Ph.D. student. 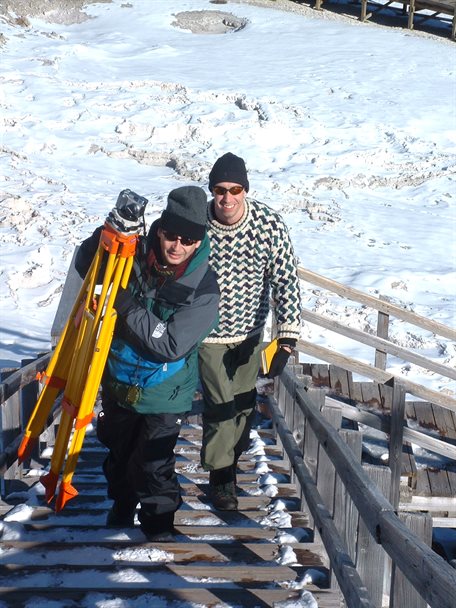 Veysey (right) and his doctoral advisor Illinois Physics Professor Nigel Goldenfeld climb the stairs to a wooden boardwalk at the terraces. 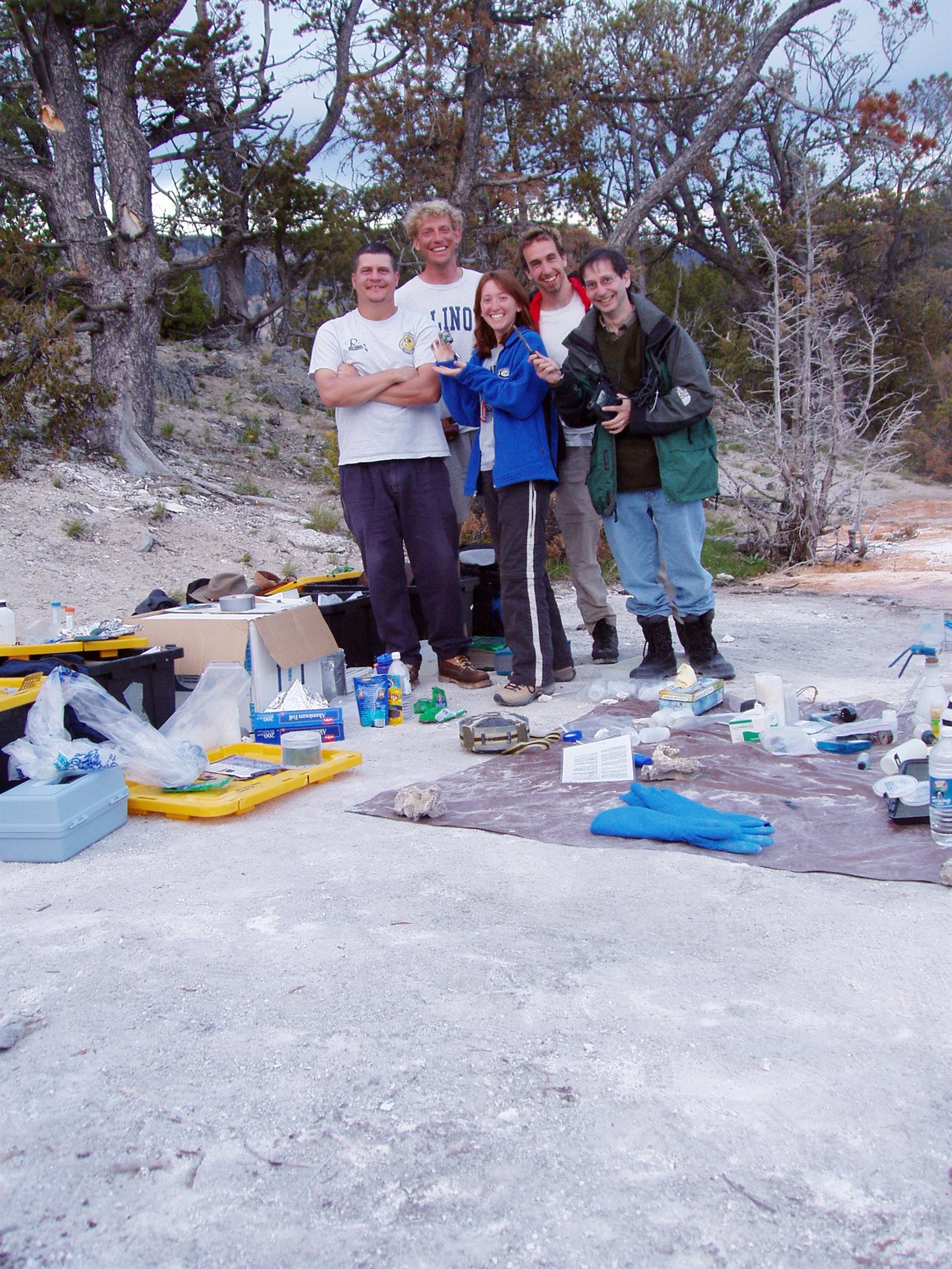 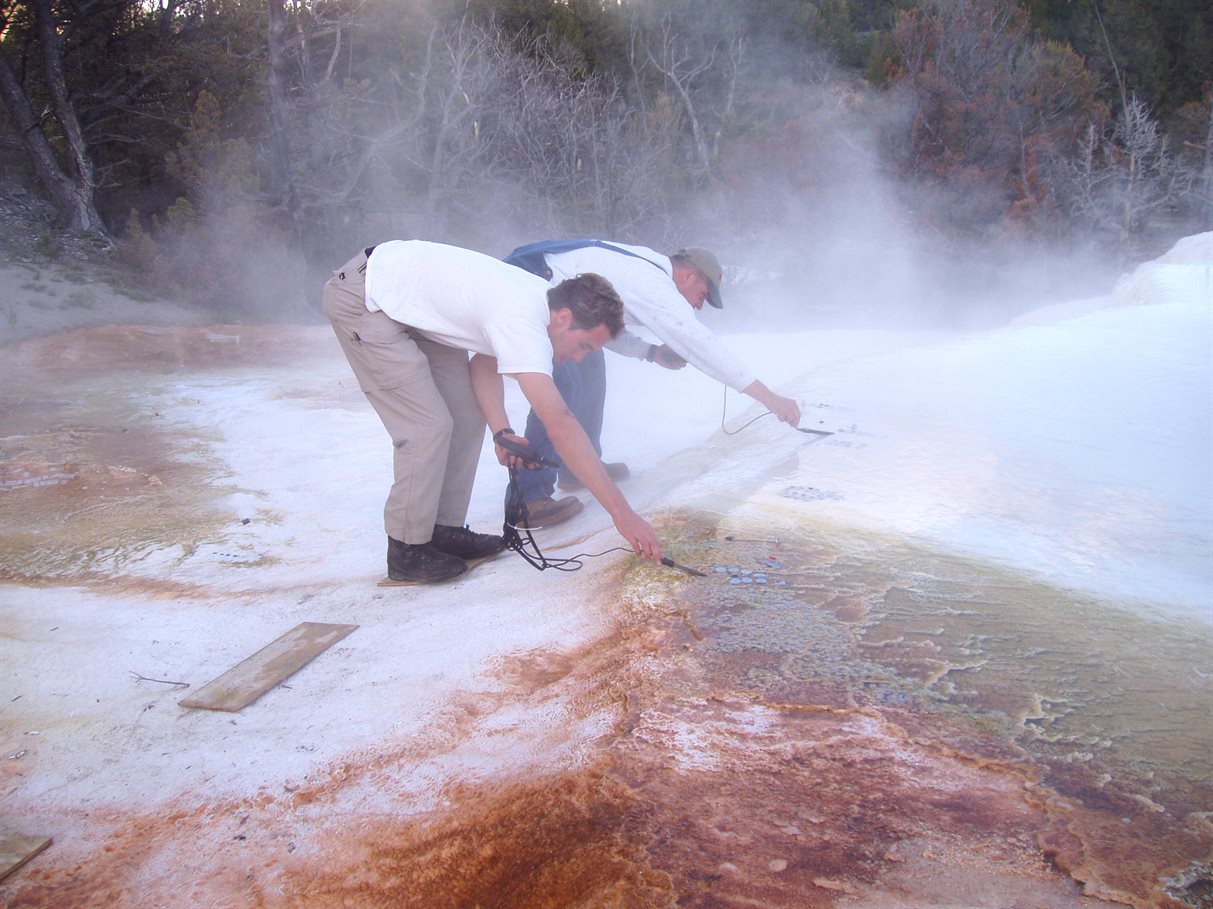 Veysey and Schickel measure Ph in the hotsprings. Photos submitted.

“The microbes speed up the process about fivefold, which is arguably important--if not to a geologist. But it will happen either way,” Veysey notes.
Studying these terraces was a rich problem, a problem that required speaking the language of more than one science, and a problem that could really require getting one’s hands dirty. Veysey loved it.

“It was really eye-opening for me,” he says of translating some of the more abstract mathematical work Illinois Physics Professor Nigel Goldenfeld’s group is known for to the very real world of Yellowstone. “I was hooked. I was drawn to science and to physics in particular because I wanted to understand how the world works, and understanding comes in the form of predictions and descriptions and equations.“ At Illinois, he also collaborated with Bruce Fouke, a professor of geology and microbiology.

Even while he was performing the research, Veysey was aware that getting at the answer to some scientific questions requires stepping over the lines that separate different disciplines. Comparing the content of his discoveries to the mode of work that produced them in his thesis, he said so himself. “I view the fundamentally interdisciplinary nature of this work as a harder and more important achievement,” he wrote.

Years spent in Washington, D.C., pursuing a career in policy rather than researching the physics of complex systems have not changed his mind one bit.

Communicating science in service of society

Veysey also recognizes the value of the early training he got in communicating science in a clear and compelling way, regardless of his audience’s foundational knowledge. While a Ph.D. candidate at Illinois, he was awarded a Mass Media Science & Engineering Fellowship by the American Association for the Advancement of Science (AAAS). He spent three months writing for the Milwaukee Journal Sentinel as a science reporter. In this work, he had to bridge a sizable gap: the highly specialized scientific knowledge and interests he had gained as a physics Ph.D. student often proved to be very different from the more accessible, practical knowledge that the general public seemed to care about. Veysey’s Journal Sentinel articles that made the greatest impact were not always those that would have garnered the most excitement had he presented them to a group of academic physicists. He recalls one of his stories on the topic of tornadoes having been especially well received.

“The amount of feedback I got back from the article really showed me that writers can have an impact,” he remembers. “But at the same time, this work had nothing to do with my hard-earned scientific expertise, so I started to wonder if there was a way to have an influence on broader society with scientific expertise.”

After completing his fellowship at the Milwaukee Journal Sentinel, Veysey served as a TA for Illinois Physics Professor Fred Lamb in his long-running Nuclear Weapons, Nuclear War, and Arms Control course.

Veysey recalls, “I found that a valuable experience. That course is a special offering at UIUC, combining physics, policy, and writing.”

Following the end of his Ph.D. program in 2006 and a short stint as a postdoctoral researcher at the UIUC Department of Microbiology, that desire to engage on the topic of science with broader society, beyond academic research communities, led Veysey to the AIP (American Institute of Physics)/AAAS Congressional Science & Engineering Fellowship program. Here, Veysey was met with just the kind of challenge he had hoped for: the chance to use his scientific expertise to help policymakers in Washington, D.C. Consequently, he never left.

As a fellow, Veysey assisted Senator Bob Menendez from New Jersey with policy work on climate change as it related to energy production and agriculture. After the fellowship ended, Veysey went on to work with former Congressman Dan Lipinski of Illinois, then Chair of the House Science, Space, and Technology Committee’s Subcommittee on Research and Education, as a science staffer. He wrote speeches, wrote legislation, dealt with stakeholders and constituents, and helped prepare the congressman for hearings. In this work, the critical thinking and analytical skills he learned as a student, the problem-solving abilities he gained as a researcher, and the ability to communicate complex information that he honed by science reporting all got put to work at once. Later, he took this same set of tools to the NSF.

Thinking broadly and thinking ahead

Today, in his work with the NSB, Veysey is continuallly challenged to think about science not only broadly, but strategically, with great enthusiasm for future developments. In the past year, the board released the NSB’s Vision 2030 report assessing some of the trends driving science and engineering right now and offering a roadmap for the coming decade’s science and technology policy, all deeply informed by challenges and opportunities that are on the horizon.
Veysey is optimistic. “It’s something I’m proud of and the board is proud of,” he shares. “And it’s off to a very good start.”

The Senate-passed Endless Frontier Act and the House-passed NSF For the Future Act, two bipartisan bills that will set funding levels and authorize new NSF activities, further gives Veysey hope for realizing the 10-year plan he and the board laid out. These bills are headed to conference in early December.

“What excites me is that [Congress and the Biden administration] is responding to some of the same challenges and opportunities the board identifies in its Vision Report and are attempting to position the country to seize the opportunity to meet these challenges.”
The part of the Vision Report he particularly wants to highlight? Evaluating the broader impacts criterion in the merit review process for NSF research funding.

“How is the research that NSF is funding benefiting Americans and people globally?” He asks, then immediately goes on to break it down, as a scientist does when faced with a complex problem. “One is competitiveness–how is the funded research contributing to the economy? And the other is broadening participation—how are we developing the workforce, including full representation of women and underrepresented minorities?”

Future science by and for everybody

Veysey approaches the future of science and technology in the U.S.—a complicated, multi-layered issue—with the full belief that, as such, it will not yield to a single approach or a single group of people. As has been the case throughout his career, Veysey is interested in facilitating conversations between disciplines and communities and combining their most valuable tools. His experience working on teams of experts who have mastery of distinct languages within science and technology has taught him that the return on investment into scientific research does not stop with the work that scientists produce while funded by the NSF. He explains, part of the benefit of investing in fundamental research comes from the eventual development of patents and commercial enterprises and teaching students.

“The benefit to society of NSF research funding also takes the form of people who can carry out commercialization, which really happens when you have researchers who are passionate, who get it done, researchers who wants to try to start a company, whatever that is,” he asserts. “We cannot neglect the domestic workforce and the people who haven’t had the opportunity to be part of the STEM workforce of our country. And whether that’s because they’re from parts of the country that don’t have opportunities or it’s because they’re from underrepresented groups and also don’t have opportunities are different problems—but we need those people in our workforce.”

And as he hopes more people, and more different people, will be brought into the fold of science in the future, Veysey himself is still itching to expand the number of scientific languages he speaks and to integrate more academic tools into his policy-and-advocacy kit.
“I fully recognize that there are many intellectual tools I don’t have, because I don’t have a formal education in public policy. Now, I’m always grasping at the offerings,” he admits.
In many ways, throughout his success in the science policy world, Veysey has continued to carry the sentiment that first drew him to Illinois as a young physicist.

“You have a certain breadth of intellectual exposure in your first year there,” he remembers with appreciation. “This is enormously helpful in relating to people across disciplines.”